Introduction to the Tarot 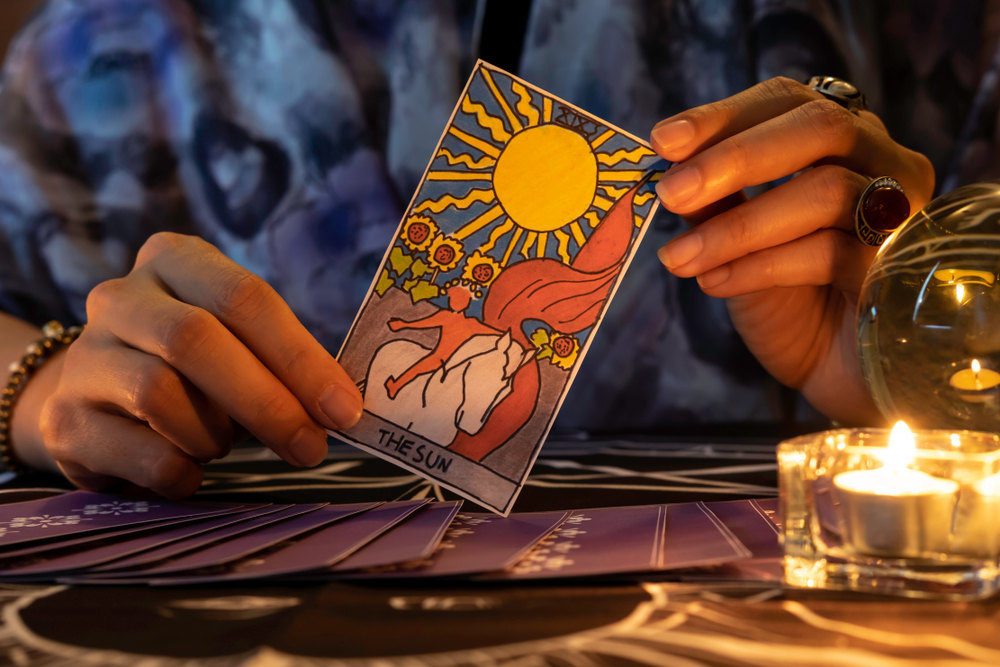 Introduction to the Tarot

The art of Tarot divination is like holding up a mirror to reality, revealing the greater forces that are working “behind the scenes” of the physical circumstances. Tarot fortune-telling is used to reveal what energies are active in a given situation— including those in the past which affected or produced the current conditions, and those which are constellating in the
future.

We may use the Tarot to reveal which energies are shaping a particular situation, or determine which energy would be most beneficial for us to bring to it. We can also use Tarot to become conscious of our own personal biases and motivations, and to see how our behavior or attitudes are shaping the conditions of our lives.

The Major and Minor Arcana

The Tarot is made up of two halves: the Major Arcana and the Minor Arcana.

Each card of the Major Arcana displays an archetype, and all of the 22 Major Arcana cards together plot a path to psychological and spiritual wholeness. The Major Arcana depicts the Universal principles which structure the human psyche and govern our spiritual evolution. Each one of these cards really represents an isolated aspect of the psyche itself— a certain quality of consciousness it is “pure form”.

These 22 energies are all pieces of one whole infinite process, and all life is a product of these 22 energies intersecting in different ways at different times. The Major Arcana plots out a path of initiation into higher consciousness, while also revealing much about the natural processes of the human mind.

The Minor Arcana includes the four suits of Pentacles, Cups, Swords and Wands, which correspond to the four elements of Earth, Water, Air and Fire.

Every detail of the images on the Tarot cards is meaningful, often on several levels at once. Esoteric symbolism is utilized in the Tarot deck to convey spiritual truths and invoke powerful emotional knowledge in the seeker, whether or not he is conscious of these processes occurring or not. The various characteristics of the pictures— including color, number, gender, facial expression, whether a surface is fully or only partially revealed, etc— are all deliberately chosen and indicate deeper truths through a pictorial symbolic language.

Tarot cards speak in the same kind of symbolic language that our dreams do. On the one hand our dreams are strange and bewildering, yet also make a certain “sense,” even if we can’t explain how or why. Tarot cards communicate very powerfully and directly to the subconscious mind, stimulating understanding on deep emotional or spiritual levels. The images of the Tarot speak directly to the deepest parts of our spirit, communicating universal teachings of Cosmic law, and awakening the spark of corresponding energies within us.

Meditation upon Tarot cards will actually produce changes in your psyche, because the symbolic imagery speaks to a deeper layer of your mind that verbal language cannot reach. By meditating on the cards, and by reflecting upon the principles which order them, you can bring greater balance to your mental and emotional faculties, sharpen your powers of memory, intuition and judgment, and generally further your quest toward Individuation, or the higher evolution of your spirit.

By meditation and practice, a student of magic essentially attempts to activate the highest expression of each of the 22 Trumps in himself, and gain the rewards innate to each: the powers of determination and will of the Magician, the balanced mind of Justice, the noble grace of Strength, thebrutal honesty of Judgement, etc. The World card depicts one who has brought all of these powers to consciousness within himself, balancing all polarities and transcending all opposites.

You can pick particular cards out of the Tarot deck to meditate upon to stimulate certain energies in your psyche. Pick a card according to what energies you’d like to bring into current situation, or simply choose a card that you are attracted to even if you don’t understand why. Meditate upon the image for 5 – 15 minutes and let the card communicate with the deeper layers of your mind.

Tips for Divination with Tarot

In fortune-telling, you can tell a lot about the situation at hand by repetitions or commonalities among the cards drawn. An abundance of Major Arcana cards indicates very powerful and dramatic forces at work, whereas an abundance of Minor Arcana indicates a more mundane, temporary condition.

Some do readings exclusively with the Major Arcana, selecting these cards out from the deck and shuffling just those 22 in order to give greater philosophical teaching to the seeker, eliminating the more mundane realities depicted in the Minor Arcana. You might use this method for “bigger”, more profound questions about your life.

If a certain suit dominates in a given reading, this indicates a prevalence of a certain kind of experience— either spiritual (Wands), emotional (Cups), mental (Swords) or physical (Pentacles). Wands and Swords are masculine suits, indicating action and dynamism, whereas Cups and Pentacles are feminine suits, indicating receptive states of being or reserves of knowledge. Readings with a lot of Cups and Wands are generally happier to live out, especially when paired together, whereas Swords and Pentacles both indicate struggle, hardship and the pain that often
accompanies personal growth.

An abundance of reversed cards in a reading indicates that the energy at work in the particular situation is blocked, either because it is passing away, or because it is newly coming into being, or because the questioner in one way or another is not allowing the energy to flow naturally.

Some people advise that a Tarot reader should have absolutely no prior knowledge about your background, employment, relationships or situation — this is wrong!

It is not in your best interest to keep your personal details to yourself, because you will receive a great deal more accurate information if you can help flesh out the particular details of the manifestation of those archetypes.

While we may easily discern from a given card what energy is present, and perhaps how it is influencing the situation, it may not necessarily be immediately apparent where in your life it is manifesting, nor whom these energies belong to or represent. When you and your reader openly collaborate on the interpretation, you will be more easily able to determine whether a card represents a literal person in your life, or an aspect of consciousness within you, or whether it refers to some situation, group or environment as a whole, etc.

One aspect which is usually of great interest is when these events will transpire, and this unfortunately is almost always impossible to determine for any oracle. Just as we can see a mountain ahead of us in the distance, but cannot accurately deduce the distance between ourselves and it, so in divination we may be able to ascertain that something will happen, without being able to say how near or far away it is in the future.

Different Tarot spreads are used to find out different kinds of information. The most common Tarot spread is the Celtic Cross, which includes descriptions of the basic issue at hand, the past influences which gave rise to it, the future energies which are will soon come into being, your basic attitude within the situation and the potential and/or most likely outcomes. The Celtic Cross is like complete energetic portrait of the situation, largely
defined by the moods or attitudes that you are bringing to it.

It is very important to remember in all divination work, especially Tarot, that the future is not set in stone; the cards reveal the natural progression of the trajectory that you are currently on. A Celtic Cross reading can be used to understand what forces are currently dominating and how they will interact, unfold and evolve. If the outcome is not favorable, then you may be able to alter it by changing his attitude or approach— and this will not necessarily be indicated in a given Celtic Cross spread, but may be deduced from an analysis of the reading and by process of elimination.

There is much knowledge to be gained from the various uses of the Tarot, both in terms of understanding the particularities of one’s own life, and in understanding the Laws which govern the Cosmos itself. Indeed, through Tarot study and practice, you will soon find that the two are only two halves of the same thing, for man’s life is only a shadow of these grand forces that shape the Universe. As the alchemical saying goes, “As Above, So Below”!